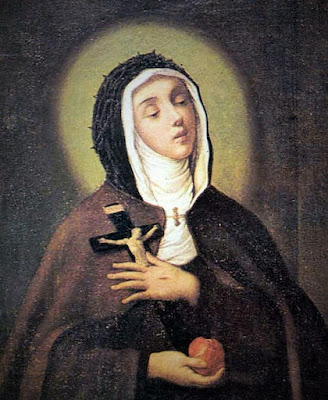 In my personal opinion, the short biography that you're about to read below belongs to one of the greatest mystics in the history of the Church; she ranks among the few chosen souls who experienced a wide array of extraordinary manifestations of the Divine, while rising to the highest peaks of sanctity.  The words below, which she uttered on her deathbed, can be used to summarize her holy and prodigious life:

“I have found Love, Love has let Himself be seen!”

Born in the Italian city of Mercatello on December 27, 1660, this Saint was originally named “Orsola (Ursula)” by her devout parents; she was the youngest of seven children in the middle-class Giuliani family. When she was only 7-years-old, Orsola’s mother, Benedetta, was struck with an illness that took her life. Before she died, Benedetta conceived the idea of commending her five daughters to one of the sacred wounds of Jesus Christ; Orsola was assigned the side wound that reached deep into the Lord’s Sacred Heart.

As often narrated in the lives of great female mystics of the Church, Orsola was highly religious from a very young age; she was reported to reserve a part of her daily meals as alms for the poor and was inclined to penitential practices… but despite her budding spirituality, her father’s intent was to groom her for a suitable marriage. Orsola, of course, resisted the idea and made known her desire to enter into consecrated life. After repeatedly pleading her case to her father, she convinced him of her sincerity and firm resolve, and he finally relented. In so doing, Orsola entered the Franciscan Capuchin Monastery of Citta-di-Castello in 1677, when she was 17-years-old.  She took the name “Veronica”, after the enigmatic Saint who compassionately ministered to the Lord on his way to Calvary. 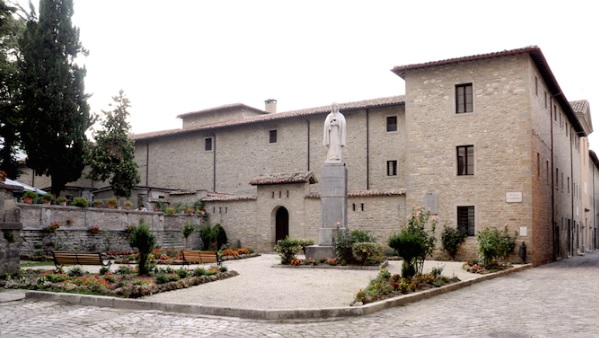 The monastery of the Franciscan Capuchin Nuns in Citta-di-Castello,
as seen today.  This is where St. Veronica lived and died.

In the beginning of her new life, Veronica was subjected to severe temptations of every sort, including the desire to quit the monastery. She fought the devil’s influence by wholeheartedly embracing the Franciscan ideals of poverty and mortification, and by blindly surrendering to the will and guidance of her superiors. Despite her initial difficulties, the young nun persevered and thrived in her vocation, fulfilling various positions in the monastery ranging from a kitchen helper; infirmarian; doorkeeper; Novice Mistress (for 34 years); and eventually the role of Abbess (last 11 years of her life).

“Many do not believe that hell exists, and I tell you that you yourself,
who have been there, have understood nothing of what hell is.”

~ Words of Our Lady to St. Veronica, after one
of the Saint’s mystical voyages to Hell.

Extraordinary graces also began manifesting and increasing in Veronica’s life: Ecstasies, Visions, Levitations, spiritual voyages into Hell and Purgatory, and sublime private revelations. These were preceded with haunting images of a mysterious chalice from which she was invited to drink. In 1694, the Crown of Thorns was imprinted around her head… and on Good Friday, 1697, the stigmatic marks in the hands, feet, and side also appeared on Veronica’s limbs.  The wounds opened and bled intermittently, and when they did so, a delightful fragrance emanated from them, which was enough to alert the other nuns as to when the stigmata were active. 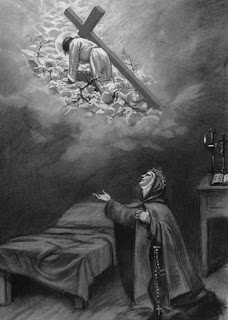 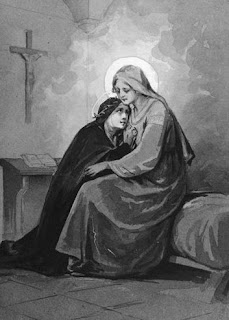 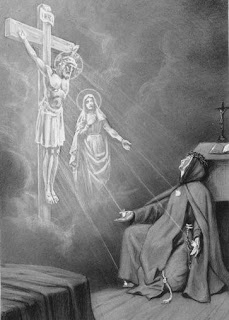 Illustrated scenes from the mystical life of St. Veronica, which included visions of
Our Lady and of Christ on the Cross that left her stigmatized.

Not surprisingly, the increasing physical signs of Veronica’s discrete mystical life soon came to the attention of her Bishop; given their highly visible nature, it simply became impossible for the nun to conceal the phenomena. A commission was formed to examine them but, more so, to test Veronica’s spirit. At the time of the inquiry, she was the Novice Mistress and was relieved of the position, after which severe moral trials followed for her: Veronica was isolated in a remote cell and prevented from having close contact with the other nuns; she was deprived of Holy Communion and only permitted to attend Mass on Sundays and Feast Days (while standing from the chapel door); she was grilled about her spiritual life and writings; and the stigmata wounds were rigorously examined by doctors and ecclesiastical authorities. Veronica humbly complied with every restriction imposed on her and, after the period of inquiry ended, she impressed the Bishop and her superiors with her evident humility and obedience; convincing all of the divine/supernatural origin of the graces surrounding her life.  The Novice Mistress was reinstated and allowed to return to the daily routine of her community.

It’s important to note that not all Veronica’s mystical experiences were overshadowed with pain; there were also many heavenly consolations that left her filled with sheer joy, among which was her “Mystical Marriage” with Christ. During this vision, Jesus gifted her with a ring that on certain occasions became visible to others. A nun who repeatedly saw it described the ring in the following manner: “This ring encircled her ring finger as ordinary rings do.  On it there appeared to be a raised stone as large as a pea and of a red color.”

"We cannot go preaching around the world to convert souls, but we are obliged to pray
continually for all those souls who are offending God... particularly with our sufferings,
that is with a principle of crucified life."

~ Exhortation of St. Veronica to her nuns

When Veronica was elected Abbess in 1716, her governance was marked with spiritual prudence and practicality. She was an ideal example of virtue and self-sacrifice for her spiritual-daughters to emulate, and she also negotiated structural renovations to the monastery to improve their living conditions (e.g. had plumbing installed to pipe in water).  Her mystical life in no way detracted from her duties as the Superior. 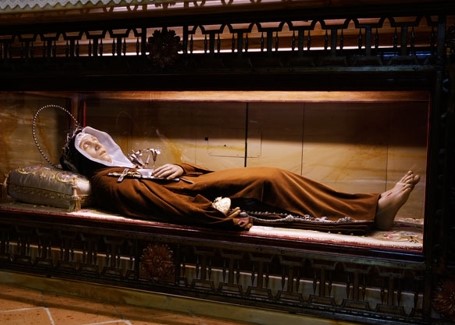 The wax image of St. Veronica that encloses her skull and bones; enshrined
and venerated in the Capuchin Monastery of Citta-di-Castello, Italy.

The holy Abbess passed away on July 7, 1727, after lingering from complications due to a stroke.  She was 67-years-old and had spent 50 years of consecrated life, intimately united to Christ.  It was with him, and through him, she generously ministered to the spiritual needs of the Church through prayer and sacrifice.  Her heart was truly given over to Jesus, her beloved spouse.

And in reference to the Saint's admirable heart... interestingly, Veronica had often remarked to her confessor that her heart was imprinted with emblems of the Passion – the Cross, nails, Crown of Thorns, etc. – and at her priest’s request, she sketched her heart with the corresponding locations of each symbol... and when additional holy symbols were added, a new diagram was created by the nun.  The Saint’s narratives were so compelling, it was decided soon after her passing that Veronica’s heart would be examined to confirm the veracity of her claims.  To the surprise and awe of those present at the autopsy, her heart was indeed discovered "branded" with the clear religious images that she drew while alive!  Hence, the Saint is popularly depicted in her iconography as holding her heart in one hand. 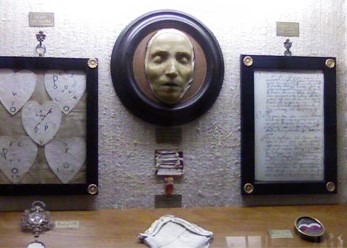 Relics of St. Veronica preserved in her Capuchin Monastery.  These include framed diagrams of her
heart marked with emblems of the Passion that she sketched for her confessor, and a wax death mask
that was molded to preserve her features after her death in 1727.

St. Veronica Giuliani was canonized by Pope Gregory XVI in 1839. Her body, which was initially exhumed incorrupt, was reduced to bones by a devastating flood that inundated Citta-di-Castello, including her monastery.  The skull and bones that survived the water damage were later enclosed in a wax figure with a mask modeled after the Saint’s actual features.  These hallowed relics are now enshrined and venerated in the chapel of her Capuchin Monastery.  May St. Veronica pray for our personal needs and the needs of the universal Church.

A Reflection
God reveals Himself to those who sincerely love and seek Him.

A Short Prayer
Lord, fill our hearts with a deep love for you as you did the heart of St. Veronica Giuliani.  Amen.