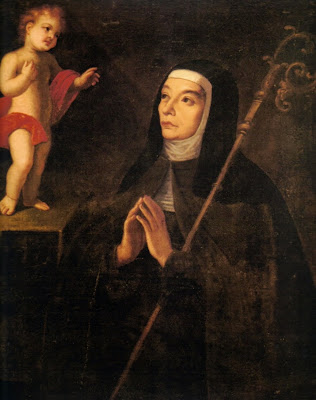 Born in Barcelona, Spain, on September 1, 1592, Jeronima Maria Agnes Astorch's early years were marked with both tragedy and remarkable heavenly favors.  She was orphaned at age 6, then at 7-years-old experienced an adverse reaction to eating raw almonds that actually killed her.  During her wake, her grieving family summoned a renowned mystic - Madre Angela Serafina Prat, the foundress of the city's Franciscan Capuchin monastery - who fervently prayed over her lifeless body and effected a resurrection!  This defining moment in Jeronima Maria’s life cemented her desire to become a Capuchin nun herself, and at the age of 11, she obtained permission to board among them in their monastery.  She lived with the sisters for six years before they finally admitted her to the novitiate in September 1608; a year later in 1609, she professed her vows.  As a newly consecrated religious, she chose the name "Sr. Maria Angela", more than likely after the nun who miraculously saved her life.

By all accounts, Sr. Maria Angela was reported to be exceedingly pious and possessing a penitential spirit. She was deeply devoted to the Passion of Christ and had a profound love for the Blessed Sacrament. In 1614, she along with five other nuns, were chosen to start a new Capuchin monastery in Saragossa where she served as the community’s Novice Mistress before eventually becoming the Abbess in 1627; Sr. Maria Angela proved to be a hands-on superior who led her nuns by example so it wasn't uncommon to see her joyfully working among her charges in the kitchen, laundry, or in the infirmary. Despite a busy schedule of prayer and manual labor, she also lived a hidden life of extraordinary union with God since she received the sublime grace of the Mystical Marriage in 1626.

In 1645, Sr. Maria Angela founded another Capuchin monastery in Murcia where she also served as the Abbess until her 70th year.  During this period of her life she studied Scriptures; wrote extensively; practiced contemplative prayer to a high degree; and experienced many other extraordinary charisms (visions, visits from her Guardian Angel, etc.) that she obediently recorded in a journal, per orders from her confessor.  Her reputation for learning was so widespread in Spain, a church commission was formed to study the orthodoxy of her writings.  Needless to say, she passed the inquisition with flying colors and one official even said of her, "Too bad she is a woman and cannot be ordained.  What a preacher she would have made!"

This mystic's final years were spent in continued writing and counseling the many souls who came to her for guidance.  She founded a confraternity of prayer in Murcia for the spiritual benefit of its members, as well as the entire city.  Her incredible life of virtue and voluntary penances ended on December 2nd, 1665; she was 73-years-old.  It was only after her death that a deep, mysterious wound in her chest - the heart Stigmata - was discovered by the sisters who prepared her body for burial. 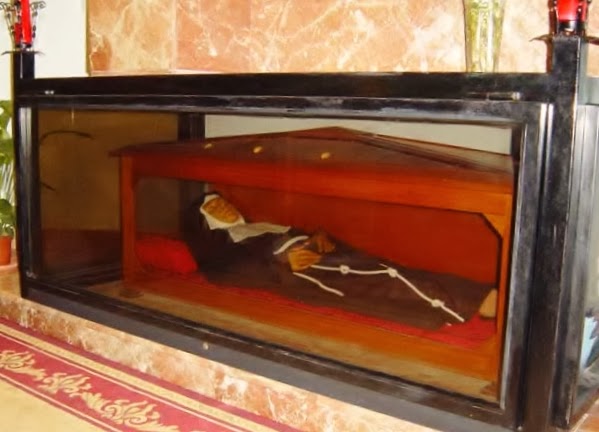 The incorrupt body of Bl. Maria Angela, as venerated in Murcia, Spain.

Bl. Maria Angela Astorch was beatified by Pope John Paul II on May 23rd, 1982; the Pontiff referred to her as the "Mystic of the Breviary".  This Blessed's incorrupt remains are reverently enshrined in a simple glass-sided coffin in the Capuchin monastery where she died.  Let us pray for her speedy Canonization.

A Short Prayer
Lord, in the deep silence of our hearts, allow us to continually contemplate You even amidst the noise of this world.  Amen.