The Infant of Prague, our little King

"He will be great and will be called the Son of the Most High; and the Lord God
will give Him the throne of His father David; and He will reign over the house of Jacob
forever, and His kingdom will have no end."
~ Luke 1:32-33, (from the Salutation of the Archangel Gabriel to the Blessed Virgin Mary) 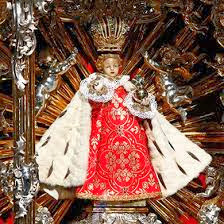 The miraculous statue of the Holy Infant Jesus, as venerated
in the city of Prague, Czech Republic 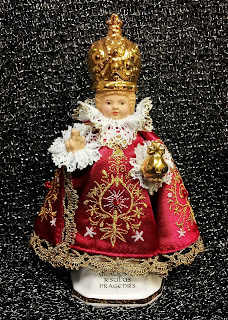 A few days ago, a coworker unexpectedly gifted me with a small porcelain representation of the "Infant Jesus of Prague".  A relative of hers acquired it while on a visit to the actual Czech shrine where the original "miraculous" image is enshrined and venerated.  The figurine I received (left photo) only stands about 5" tall and is dressed in red fabric robes; I am completely charmed by it.  I showed it to a few other Catholic coworkers and was somewhat surprised when they expressed ignorance about the background story of the statue.  I took it for granted they already knew about this particular devotion because it's arguably the most iconic depiction of Christ, as a child, honored throughout the world... and all my life growing up, my Filipino family and relatives had replicas of the Prague statue - we called it the “Santo Nino" ("Holy Child" in English) - prominently displayed in our homes.


Being that Christmas is literally right around the corner, I thought it would be an opportune time to share about the devotion connected to the famous Prague statue, especially with those who may not be familiar with it...
THE HISTORY OF THE INFANT OF PRAGUE DEVOTION
The image known as the "Infant Jesus of Prague" is a small wax figure of the Christ Child that was originally molded in Spain in the mid-1500s.  Apparently a royal heirloom, it ended up with a deeply pious Bohemian Princess named, Polyxena von Lobkowicz, who inherited the statue from her Spanish mother.  Princess Polyxena was a patroness of the Carmelite Friary of Prague, and in turn, she was inspired to donate the image to the monks with the following prophetic words:
“Venerable Fathers, I bring you my dearest possession.  Honor this image and you shall never want.”
The Carmelites enshrined the image in a small chapel within the Church of Our Lady of Victory and it was affectionately honored with special prayers and devotions.  During a time of civil unrest in 1630, the friars hastily fled to Munich and devotion to the statue waned, then ceased altogether, after the chapel was plundered by Swede Lutherans in 1631.  Sadly, the Protestants desecrated the statue by breaking off its hands before throwing it onto a pile of rubble behind the altar.  There, the image lay forgotten until 1637 when the Carmelites returned to Prague. 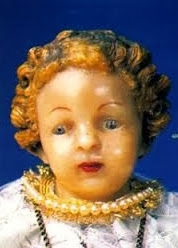 A closer view of the original statue's face.
Providentially, a holy Carmelite priest - the venerable Fr. Cyril of the Mother of God - recovered the damaged statue and lovingly cleaned it, as best he could. He reinstalled the statue in the chapel, and one day, as he was praying for help before it, Fr. Cyril heard a voice emanating from the image:
“Have pity on me, and I will have pity on you.  Give me my hands, and I will
give you peace.  The more you honor me, the more I will bless you.”


Fr. Cyril promptly obeyed the request and had the statue cleaned and restored... and of course, new hands were crafted to replace the missing ones.  He also restarted the special prayers and devotions to the Infant Jesus of Prague, and soon news of healing and other favors received were being reported in direct connection with the image.  It was evident that the Lord was not only keeping his word with Fr. Cyril, but he was also extending his promise of special grace to others who honored this representation of his childhood.***

*** NOTE:  There are other reported miraculous images of the Christ Child (e.g. the Santo Nino de Atocha, Spain & the Santo Nino of Cebu, Philippines), but as far as I am aware, none of these other images came with a private revelation/message from our Lord that specifically promised his blessings.

In time the Holy Infant of Prague became so highly regarded, it was renowned throughout all Europe, and eventually all over the world.  Today, the statue appears majestically crowned with gold and dressed in seasonal decorative robes, donated by its many devotees from around the globe.  Although it appears larger in photos, the wax figure only stands a little over 18” tall.  Replicas of the Prague image are common in churches and in private homes, where blessings also grace those who honor and celebrate the divine infancy of Our Lord, Jesus Christ. 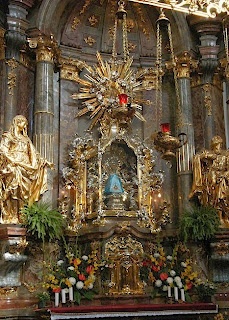 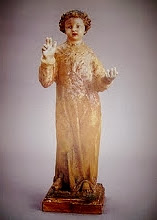 The magnificent shrine of the Infant Jesus of Prague... and what the statue
looks like underneath all its fancy robes and ornaments

As I stated earlier, growing up it wasn't uncommon to see replicas of the Infant of Prague in our family home (my mother had a statue) and also in the homes of many of my relatives.  I didn't quite appreciate the devotion back then... but now that I understand its history and significance, I have a deep respect for it.  So whenever I reflect on any image of the Baby Jesus it never fails to amaze me how God, in all his immeasurable omnipotence, managed to make himself "small" so as to pour himself into the body of a tiny child.  Just imagine the entire ocean fitting into a tea cup because that's kind of what happened; it's the awesome Mystery of the Incarnation!

And finally, devotion to the Holy Child also serves to remind us of an easily overlooked attribute of God: Humility.  Yes, our Lord is a humble God; he humbled himself when he became man... and I think a big part of honoring his Incarnation and Divine Infancy is to follow suit in the virtue of humility, as well as, to practice a childlike faith and confidence in our personal relationship with our Heavenly Father.  In return, we have the assurance of the Christ Child's promise: "The more you honor me, the more I will bless you."
So with that said, may the Infant Jesus - our little King - reign in our hearts, teaching us LOVE and HUMILITY... and bringing blessings of PEACE and PROSPERITY into our lives.
A PRAYER TO THE INFANT JESUS OF PRAGUE (may be recited for 9 consecutive days as a novena):

O Infant of Prague, who said, “The more you honor Me, the more I will bless you”, give us the strength to bear the burdens of daily life in this sinful world. Give us a firm purpose of amendment and a resolve to lead a better life. Help us endure our afflictions and sorrows with patience and courage.  Finally, O beloved Infant King, if it be Your will, grant my petition... [mention here], but whatever You choose, give me the strength to submit to Your will in all things.  Amen.
(Say an Our Father, a Hail Mary, and a Glory Be in honor of the Holy Infant of Prague)