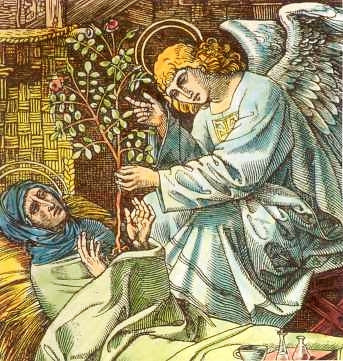 St. Lydwina of Scheidam
A Victim Soul for a Church in Turmoil ~ Feast: April 14th

Born in 1380, in the town of Scheidam, Holland, this humble holy woman was an extreme - yet edifying example - of terrible physical sufferings endured for the love of God, and for the spiritual good of the Church and sinners. Her parents named her “Lydwina”, which according to an account I read, actually means “suffering”, a highly prophetic name considering all that this Saint went through in her lifetime.

As a child, Lydwina was pious, but not overly so. Her contemporaries described her as a pretty girl who was like any other in her small town. When she was about 15-years-old, a tragic accident occurred that changed her life forever.  One chilly day, she was invited by her friends to go ice skating on a frozen canal.  One of her companions collided into her, causing her to fall against a protruding rock that broke one of her ribs. The doctor who treated the injury failed to properly set the broken bone, which resulted in excruciating chronic pain for the young maiden.  For months afterwards she not only suffered the injured rib, but was also prone to nausea and severe headaches. 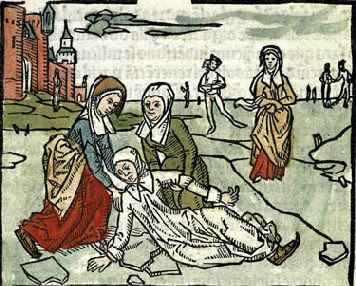 Lydwina’s family grieved as doctor after doctor was consulted, with each one not being able to alleviate their daughter’s condition. To make matters worse, infected abcesses formed over her injured side that spread throughout her body, including her lovely face. One of the sores cost her an eye and the remaining eye became highly sensitive to light. Eventually, Lydwina became a permanent invalid, unable to move except for her left arm, which remained strangely free of any malady.

In her desperation, Lydwina appeared to lose her childhood faith and fell into a state of deep depression, all the while questioning the goodness of God.  Fortunately, visits from her parish priest prevented her from completely going over the edge.  The priest spoke to her about the sufferings of Christ and gently encouraged her to accept her condition as a way of identifying with our Crucified Savior. Slowly, but surely, his wise counsel took root in her heart and Lydwina came to accept her illness as a unique gift from God, offering her sufferings as an active prayer for the good of the Church, which at the time, was in the midst of schism and confusion.  The more she surrendered herself to God, the more her condition worsened until her body was literally falling to pieces... but inexplicably, she continued to live.

News of the supernatural nature of Lydwina’s sickness attracted the pious and curiosity seekers, alike, to her home.  All were amazed that despite her extreme physical afflictions, she wouldn’t die, and many attributed her miraculous survival to a special favor from God.  The pious maiden, on her part, continued to deepen her relationship with Jesus through frequent Holy Communion and fervent prayer… and as though her existing pains were not enough, she begged the Lord for even more suffering as a way to expiate for sinners and to help heal the divided Church. God granted the request by imprinting on her body the Sacred Stigmata.  Thus, Lydwina’s spiritual transformation into Christ was sealed by the five wounds of his Passion.

Lydwina suffered for nearly forty years. Her home became the spiritual center of Scheidam with many people being the recipients of her advice, prayers, and charitable alms.  To compensate for her terrible sufferings the Lord showered her with remarkable heavenly charisms, which included the ability to live without food (she survived only on the Eucharist!)... frequent visits from her Guardian Angel... spiritual journeys, via bilocation, to sacred sites in the Holy Land... and visionary experiences of Our Lady and the Saints; Heaven; and Purgatory.  Even the many open sores all over her body, and the blood they issued, were blessed by God in a special way - they exuded a wonderful fragrance of incense that both energized and encouraged those who nursed and assisted her, so as to inspire devotion rather than loathing over her grotesque physical condition.

Our Saint’s holy death occurred in 1433 after she was forewarned by a vision.  According to witnesses, her badly disfigured body was miraculously restored to its former state of health as it was being prepared for burial - Lydwina appeared youthful and lovely again with no traces of the terrible wounds and deformities that scarred her in life.  Her tomb became an immediate place of pilgrimage and a chapel was erected over it.  St. Lydwina of Scheidam was Canonized in 1890 by Pope Leo XIII.

A Reflection
“I know that my Redeemer lives, and that in the end he shall stand upon the earth: and after my body has been destroyed, yet in my flesh I shall see God.”  ~ Job 19:25-26

A Short Prayer
Lord, give us courage in our sufferings, as you did with St. Lydwina.  Rather than be discouraged, help us to see our crosses as special gifts from you.  Amen.