"Because the life of the flesh is in the blood: and I have given it to you, that you may make atonement
with it upon the altar for your souls, and the blood may be for an expiation of the soul."

In the past few days, there has been quite a bit of news coverage involving the enigmatic blood-relics of St. Januarius, or "San Gennaro" [left photo], as he is called in Italy, where his relics are enshrined in Naples.  The relics are big news throughout that country because the blood of the Saint is known for a recurring miracle that occurs three times a year on September 19th (the Saint's Feast); December 16th (anniversary of the eruption of Mt. Vesuvius, 1631); and the first Sunday in May, which celebrates the translation of the relics into Naples where they reside in the Cathedral.  On these days, in the presence of a large anticipating crowd, the normally dark, crusted blood mysteriously "melts" and becomes fluid.  If the miracle does not occur, terrible events are said to be forthcoming so the general population bursts into exuberant rejoicing when the blood turns to liquid.

This past Saturday, 3/21/2015, the blood-relics of St. Januarius again made international headlines because the miracle recurred outside of the normally scheduled dates, which is rare; they liquefied in the presence of Pope Francis during his recent visit to the Neapolitan Cathedral.  It was a historic and highly significant event given that the last time the blood liquefied in the presence of a Pontiff was in 1848 with Pope Pius IX; it did not even liquefy in the presence of the late Pope John Paul II during his visit in 1990, and when Pope Benedict XVI was there in 2007.  The photo and the news article shown below were taken from the Catholic Herald website out in the UK, and they detail the Pope's encounter with the Sacred Relics of St. Januarius: 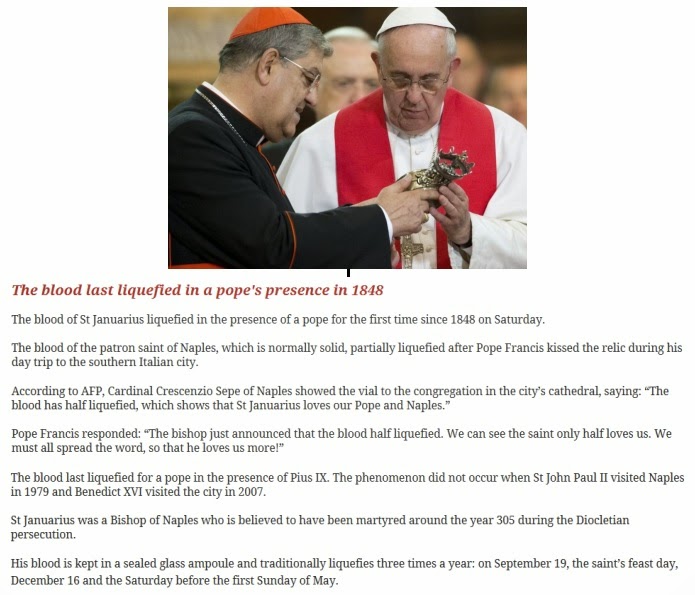 For those who are not familiar with the life of St. Januarius and/or his relics, according to Sacred Tradition he was a Bishop of Benevento, Naples, who was martyred during the great Christian persecution instigated by the Roman Emperor, Diocletian.  After he was apprehended and beheaded in the town of Pozzuoli, circa 305, a small amount of his blood was collected in two small glass vials by a pious woman named, Eusebia**.  The bodily remains of the Martyr (the skull and bones), along with the small ampules of his blood, eventually made their way back to Naples in 1497, where they've been enshrined ever since.  The miracle of the liquefying blood, however, actually dated back to 1389 when it was first documented... and it apparently continues up to the present time.  Science has yet to find an adequate explanation for the mystery.

** NOTE:  The practice of collecting the blood of Martyrs was a pious custom in the early Church. Being a persecuted minority, the Christians of that time found courage and inspiration in the lives and heroic sacrifices of Martyrs, and they treasured their holy remains as precious relics; often meeting at the tombs of Martyrs to pray for help and to celebrate the Mass.
Although the miraculous properties of the blood-relics of St. Januarius are the most well-known and scientifically studied, they are not unique in the annals of the Church.  There are actually at least 5 other blood-relics that reportedly liquefy in coincidence with special Feast Days.  One of the intents of this particular blog is to share about these other little-known blood miracles, which are none-the-less, just as remarkable:

The Blood of St. John the Baptist 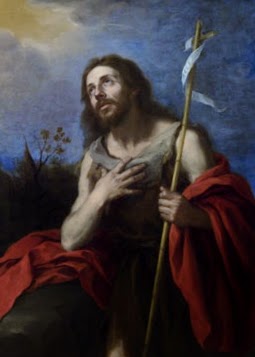 Yes, according to Sacred Tradition, there is a small amount of blood-relic from this significant New Testament figure that is still in existence.  The Church of San Gregorio Armeno, also in Naples, reportedly possesses a small vial of blood from St. John the Baptist, that liquefies on certain occasions, particularly on June 24th (St. John's Feast) or August 29th (Feast of the Beheading of St. John) when the relic is exposed for public veneration. 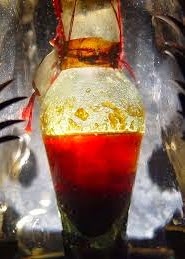 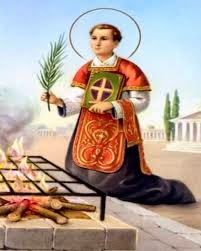 The miraculous blood-relic of St. Lawrence of Rome, Martyr of the Faith

In the Abbey of St. Mary, in the Italian city of Amaseno, there is a phial of blood that is reported to be from this famous Martyr who was murdered by being slowly grilled to death in Rome.  The blood was said to have been saved by a sympathetic soldier who collected it during the Saint's torture.  Since the year 1600, the blood of St. Lawrence reportedly liquefies between August 9th and 10th, with the latter date being the commemoration of the martyrdom of the Saint. 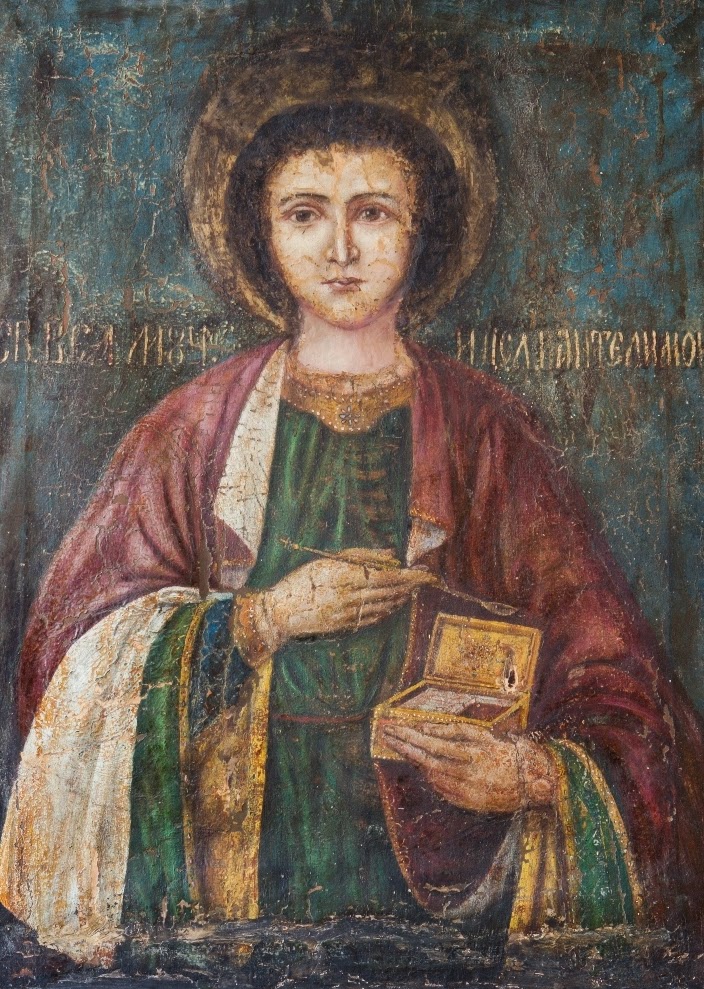 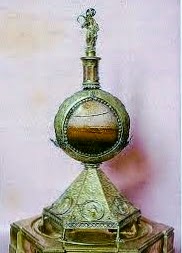 An icon of St. Pantaleone and the reliquary containing his liquefied blood.

This heroic Martyr of the early Church was killed the same year as St. Januarius; also a victim of the persecution launched by Diocletian.  Pantaleone was the son of a pagan and a Christian mother from Nicomedia (now in present day Turkey), and was a successful doctor by trade.  He fell away from Christ for a while, but was converted through the help of a devout Christian friend, and practiced his faith with renewed fervor.  He was apprehended and tortured for his beliefs before being beheaded.

St. Pantaleone's blood was secretly collected in a small flask by the Christians who witnessed his death, and they eventually made their way to Ravella, Italy, in the early 12th Century where they were venerated and exhibited the liquefaction phenomenon.  The wonder continues today with the miracle occurring each year on, or around, the Saint's Feast on July 27th. 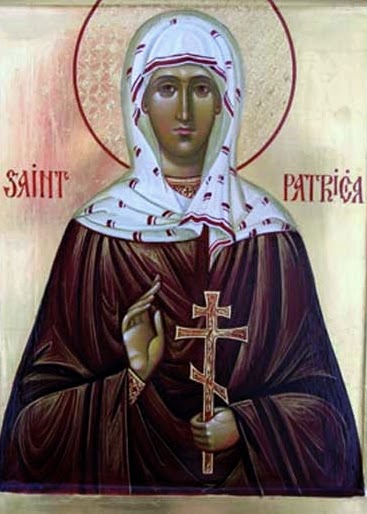 A nun holding the reliquary of the fluid blood of St. Patrizia for
pilgrims to venerate and a traditional depiction of the Saint.

Unlike the men described in the post, this particular Saint was not a Martyr of the early Church.  Rather, she was a woman of royal blood - a descendant of the Roman Emperor, Constantine, and his mother, St. Helena - who fled from Constantinople to Rome where she professed consecrated virginity directly to the Pope in order to avoid an arranged marriage imposed by her father.  When she returned to her country after her father's death, Patrizia renounced her royal titles and gave her belongings away to the poor.  On her way back to Italy, a storm shipwrecked her in Naples where she lived out the rest of her life in the practice of virtue and became highly revered by the local populace.  She died at age 21.

About a century after her death, an over-zealous devotee - a knight who received a favor from the Saint - obtained permission to spend the night in St. Patrizia's shrine where he wrenched a tooth from her skull to preserve it as a relic.  The sacrilegious act caused abundant blood to mysteriously flow from the empty socket left by the stolen tooth, which was then gathered into two glass ampules on the following morning by church officials.  It is this blood that reportedly liquefies every Tuesday, as well as on the Saint's Feast Day: August 25th.

Today the miraculous blood-relics are enshrined in the Neapolitan Church of San Gregorio Armeno, where the blood of St. John the Baptist are also guarded.  St. Patrizia is the co-patron of Naples, along with the illustrious St. Januarius.

A portrait of Madre Passitea Crogi, that is said
to be a true likeness of her features.

This mystic soul was celebrated in her lifetime throughout Italy for her sanctity and mystical gifts, which included the Sacred Stigmata.  She was inspired to found several foundations of Poor Clare convents throughout Italy before dying in Siena.  During her ecstatic-sufferings of the Passion of Christ, blood flowed freely from her stigmatic wounds, which her spiritual daughters collected into small vials.  It has been reported in several of her convents that some of Madre Passitea's blood has liquefied throughout the centuries.

For certain I know some who read this post will wonder why this particular phenomena happens at all.  The truth is... I don't have an answer for that question.  I don't think anybody does.  What I do know for certain is that blood has always been significant in many cultures, as being deeply connected to LIFE... and in the Christian Tradition it also denotes EXPIATION and SACRIFICE, which were common threads in the lives of the individuals featured above; their self-sacrifice of blood - their very lives - united them vicariously to Christ's Passion... and to the eventual glory of His Resurrection.

Perhaps the sign of the blood transforming from dry, dead matter into vibrant living blood is meant to remind us of two things:  A) We don't die once this earthly life is over; eternal life with God is a very real possibility... and the inhabitants in Heaven are still very much alive although their bodies are dead, and... B) These holy people - along with all the other Saints - are still praying and interceding for every one of us before the throne of God... for our personal needs, but more importantly, for the grace to one day join them in the celestial paradise.  This premise may not be 100% correct, but it's my personal take on it.

May 2, 2021: The blood of St. Januarius liquifying at a time of pandemic - a hopeful sign.
We are not foresaken!
Peter @ Guadalupe House Ministry, Honolulu