An update on the Escarchas...


As of this writing, it's been just about two months since I first witnessed the remarkable appearance of "Escarchas"... and the beautiful shiny flakes of varying colors are still materializing around me and a few close friends with whom I share a strong devotion to our Blessed Mother and the Saints. After seeing them mysteriously appear on multiple occasions and praying over and over to discern them - even seeking guidance from a priest - I'm convinced what's occurring is miraculous in nature and a sign from Heaven. Hence, I've made it a point to note down my observations and thoughts in regards to Escarchas that may interest readers - the list below is based on what I've personally seen and experienced:

+  First, and foremost, the appearance of Escarchas is always unexpected and unpredictable... they can't be "willed" or prayed to appear, but rather, it's really up to God as to when and where they manifest. From what I've seen, this variation of "Manna" appears primarily when there is an atmosphere of Christian faith and spirituality such as during times of personal or group prayer (especially during the Holy Rosary); quiet spiritual reflection; and during and after Holy Mass (especially during the priest's homily, but I've never seen them materializing during the Eucharistic Consecration).

As far as where they appear, I've witnessed their materialization in my home, in churches, at my workplace, and even in my car when I'm driving to Mass, or to speaking presentations and prayer events where my pilgrim statue and/or relics were invited. At these places the Escarchas have manifested on a few of my statues and reliquaries (under the glass covering!)... in my palms... on the faces and arms of friends... on clothing... on furniture... on the floor and walls... and even on my paperwork at my job (significantly, I offer Jesus my daily work every morning). 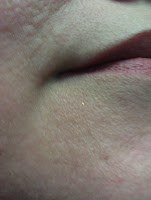 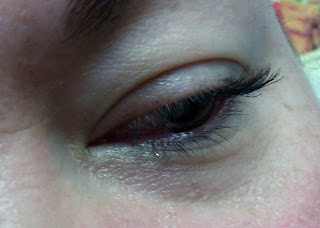 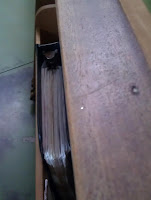 Golden flakes of Escarchas that appeared on a friend's face (chin, eye) while we were faith-sharing,
and on a pew during Mass at St. John Vianney Church in Enchanted Lakes
(click on all the photos on this posting to view larger images)

+  The Escarchas first appeared as silver and golden flakes, but as weeks went by other colors have manifested, too:  green, red, pink, purple, and various shades of blue. On a few occasions, the Escarchas were even colorless, resembling very small slivers of clear glass. There are a couple of websites that report the colors signify certain meanings, but I haven't experienced anything to the effect that confirmed that theory. I did notice, however, that the gold and silver Escarchas frequently appeared during Mass. 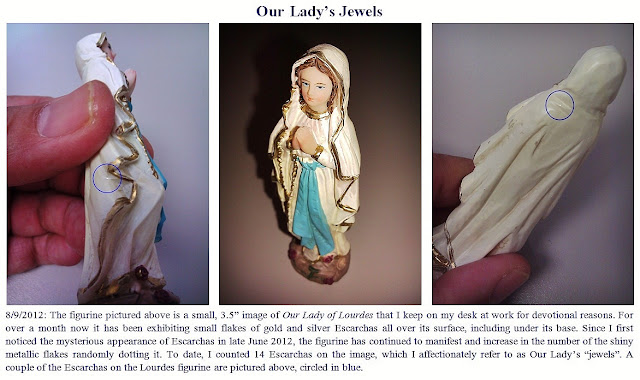 +  The Escarchas ranged in size and shape from very fine dust-like particles... to gold shavings... to geometric hexagonal particles... and even Rosary bead formations! On one occasion, a red Escarcha was in the perfect shape of a heart (see below), which caught me by surprise and touched me deeply! Stranger still, at two other times, they materialized in the form of crystalline particles resembling tiny bits of coarse rock salt (there was nothing around me that remotely resembled salt), recalling to mind the significance of salt in Sacred Scripture (Matthew 5:13).

I also want to add that although Escarchas have often been described as "glitter", they are not glitter - there are clear visible differences in size, shape, and texture from the man-made glitter seen on crafts and decorations.  In fact, Escarchas are far more delicate looking and they give me the impression of being organic (natural) in composition rather than synthetic (artificial). 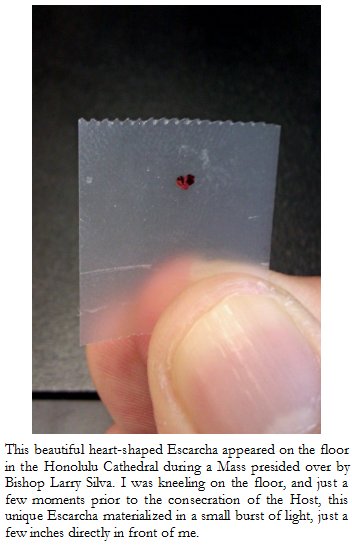 +  To best describe how they manifest, my immediate vicinity would be clear of any type of small debris, when suddenly, a little "sparkle" of white or colored light will appear out of nowhere only to be replaced by an Escarcha. This process would then repeat itself. I have never seen them falling or "raining" down, as described on other religious websites by witnesses.

Countless Escarchas that appeared on a friend's arm after she participated
at a First Saturday Rosary for Peace at St. Anthony's Church in Kailua
(click on the triangle at the bottom-left to play the video)

+  The Escarchas, at times, have changed from one color to another. For example, on one occasion while I was at Mass, an Escarcha manifested near my foot. I picked-up the glittery flake with a finger and clearly saw that it was silver in color, and I rubbed it into a crease in my palm as a way of safekeeping it until I could collect it with tape. Later, when I opened my hand, I noticed the same Escarcha had turned bright gold! At least one other person who I shared Escarchas with has reported back to me about its color-changing properties. 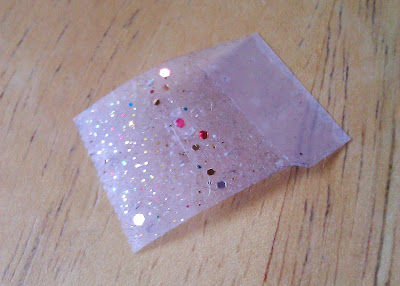 Shiny, multi-colored Escarchas that I collected with tape in a span of several days,
and later affixed to prayer cards that were shared with sick family and friends.

+  Lastly, Escarchas have sometimes multiplied, and likewise, disappeared after materialization. On a few occasions, I've seen a single flake materialize on the surface of something, and after collecting it with a piece of clear tape, there would all of a sudden be other Escarchas on the same item or on my fingers! Some friends with whom I've shared taped Escarchas with have reported how the glittery particles have later manifested on, or around them, during their personal prayer times, which could also be interpreted as a form of multiplication.

... and opposite of multiplying, I've seen Escarchas materialize only to vanish as mysteriously as they appeared. More than once, I've put my finger on an Escarcha in order to place it on a piece of scotch tape, but when I looked at my finger, the Escarcha was no where to be seen. 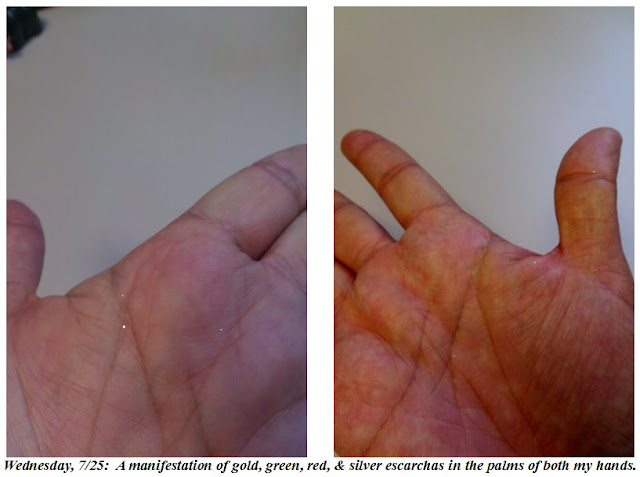 I'm quite baffled as to why all this is happening to me and my friends. One website I researched stated that Escarchas are an indication of the Blessed Mother's presence, or even the Holy Spirit. I believe the statement is, for the most part, true... and in my own experiences I feel strongly that they are connected to the Rosa Mystica Devotion, which I promote. But I certainly don't claim to be a "mystic", nor do I feel particularly worthy of having Our Lady or the Holy Spirit bless me in such a manner.

What I do know for sure is that each time I witnessed the appearance of Escarchas, I felt a deep conviction in my soul that God exists and He's very, very close to us; not distant and beyond reach as some people might imagine... and He loves us very much and desires us to know it and sense it tangibly. At the same time, I felt inspired to love God in a deeper manner and my heart was filled with profound joy and gratitude.

I think a dear friend inadvertently hit it on the mark, as to the purpose of Escarchas, when she made a remark to me after I shared a few gold and green Escarchas with her - in a tone tinged with emotion, she said:


"You know what this is?  This is dust from Heaven...
and if the dust from Heaven looks like this - can you
imagine how beautiful the rest of Heaven must be?
I can't wait to see it!"

It was at that moment I came to realize that, through Escarchas, Jesus was generously giving us a glimpse - or more like a tiny "sample" - of the beauty,  wonder, and glory found in His Kingdom; the reward that awaits all Believers who are faithful to Him.

“For behold, darkness will cover the earth and deep darkness the peoples;
but the Lord will rise upon you and His glory will appear upon you.”