Blessed Pierina Morosini was born on January 7th, 1931, in Albino, Italy; one of eight children born into a poor family. From an early age she aspired to become a nun, but postponed her religious vocation to help her parents in raising her younger siblings. So the meantime she strengthened her spiritual life with daily Mass and diligent prayers, and moved by her deep love of God, she made a private vow of virginity with her confessor’s permission. 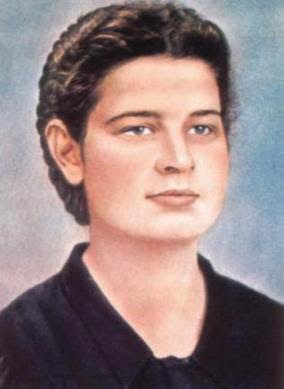 While attending to her duties at home, Pierina also found time to serve her parish as a catechist and she organized charitable collections for the poor and in support of local seminarians. In 1947, she attended the Beatification of Maria Goretti, the young Martyr of Purity who is now a Saint of the Church. Pierina was so impressed by the young martyr’s sacrifice that she told her companions, “It would be a great happiness for me to die like Maria Goretti.” To which her friends responded with, “If you die as she did, we promise to come to your Beatification.” It was a promise made in jest that later turned out to be highly prophetic.

As the pressing financial needs of the Morosini family grew, it became necessary for Pierina to seek employment in a nearby textile factory. Her supreme personal test of faith came on April 4th, 1957, while she was walking home from work. She was assaulted by a would-be rapist, and in her determination to preserve her virtue, she fought back and was severely beaten by her assailant. She was found by one of her brothers who came looking for her after she failed to arrive home. He asked her about the attacker, but Pierina could only point to her head, disfigured by deep wounds; next to her was the apparent attack weapon - a large bloody stone. The innocent victim slipped into unconsciousness and lingered for two days before dying from her injuries; Pierina never identified her killer.

When news broke of Pierina’s tragic death, her neighbors immediately acclaimed her a “new” Maria Goretti; another virginal soul who had sacrificed her life to preserve her innocence. The community already had deep respect for Pierina because of her sincere piety, and now their admiration for her increased and the place of her attack (right photo) quickly became a pilgrimage destination after miraculous cures and other graces were reported by those who prayed at the site.

Growing popular devotion prompted the Church to open her Cause for Canonization, which reached the Beatification stage in October 1987. As seeming confirmation of her holiness, Pierina’s body was unearthed – mysteriously incorrupt – during the ritual examination of her relics; they are now venerated in the parish Church of Albino.