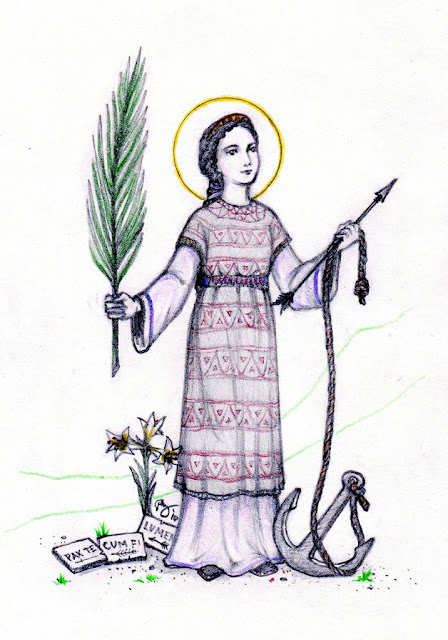 Although there is little we know about the historical life of St. Philomena, the facts that we do have concerning the circumstances of her death, are sufficient to inspire admiration for her. On May 24, 1802, a tomb containing the skeletal remains of a teenaged girl was accidentally found in the Catacombs of St. Priscilla beneath Rome, Italy.  A cracked phial of blood was also in the tomb along with three terracotta tiles that were inscribed with Latin texts and painted with symbols associated with Christian martyrdom: a palm leaf, an anchor, and two arrows… and when the Latin inscriptions were combined, together they read, 'Pax Tecum Filumena' (Peace be with you, Philomena).  Considering the early Christian practice of carefully identifying the tombs of Martyrs, and preserving hallowed relics of the blood they shed for Jesus, the circumstances strongly indicated the remains belonged to a person who had been highly revered by primitive Christians – a Martyr named Philomena (Daughter of Light).

The Church immediately took custody of the remains and they were almost forgotten in storage until a priest named Fr. Francesco de Lucia from Mugnano del Cardinale (or simply, 'Mugnano') traveled to Rome in 1805 to acquire relics for his rural parish church. Providentially, he was given Philomena’s bones, which he enclosed in an ornate case, within a life-sized paper mache statue representing her… and when the relics were solemnly enshrined in Mugnano, abundant miracles were reported, prompting a spontaneous devotion to the Child-Martyr although she hadn’t been formally Canonized yet. It wasn’t until January 13, 1837, that Pope Gregory XVI officially approved her cultus, or public devotions, after he was personally involved in recognizing the miraculous healing of the Ven. Pauline-Marie Jaricot (d. 1862) - the saintly founder of the Living Rosary Association - from a terminal heart illness, after she invoked St. Philomena's assistance at her shrine in Mugnano.

As for details concerning the Saint’s life… the popular account often cited today was actually compiled from identical private revelations, reportedly revealed by St. Philomena, herself, to three individuals living in different parts of Italy.  According to these church-approved revelations, the Saint was a Greek princess who had traveled to Rome with her royal parents. Her youthful beauty attracted the lewd advances of the pagan emperor Diocletian, but being a devout Christian who had solemnly consecrated her virginity to Christ, Philomena firmly rebuffed him while professing her faith in the one true God.  Despite the pleas of her parents to accept the emperor's proposal, the Saint remained firm in her refusal.

The enraged emperor promptly sentenced the princess to brutal torture and execution, which was carried out, via a round of scourging; an attempt at drowning in the Tiber with an anchor tied to Philomena's body; and by a firing squad of archers. With each attempt to kill her, the Lord sent angels to miraculously rescue and/or heal her, which resulted in scores of Romans converting to Christianity.  The exasperated Diocletian finally had her beheaded, thus, finally earning her the Martyr’s Palm of Glory in circa 304.  She was said to have been only 13-years-old at the time of her death. 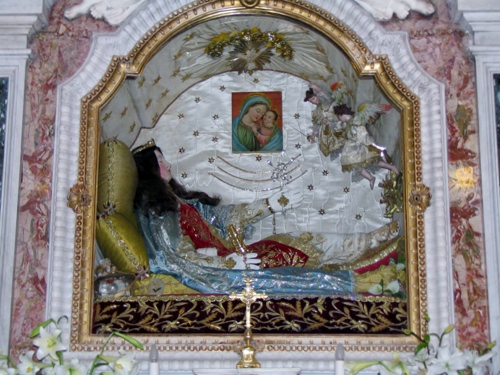 The tomb and miraculous statue of St. Philomena within her shrine at Mugnano.
The Saint’s bones are enclosed within the image.

Throughout the decades, the young Saint has commonly been represented as a lovely girl carrying one of the arrows that was aimed at her and the anchor that was used to try and drown her.  Her reputation as an effective intercessor has earned her many loyal devotees, worldwide, and the title 'Powerful with God' or 'Thaumaturga (Healer)'.  Among St. Philomena’s many clients can be counted other great Saints who had confidently invoked her name: Bl. Anna Maria Taigi, Bl. Bartolo Longo, St. Damien of Molokai, St. John Neumann, St. John-Marie Vianney, Pope St. Pius X, St. Frances Xavier Cabrini, and the Ven. Maria Luisa of Jesus (one of the three mystic souls who received a private revelation of the Saint’s life), just to name a few.

I, personally, have become a grateful and enthusiastic devotee of this Saint after two important prayer intentions of mine were speedily granted through her assistance (one request was answered within an hour!).  In addition, on another occasion, her 2nd Class Relic in my ministry's custody manifested the mysterious sounds of "knocking" (a phenomenon often reported at St. Philomena's shrine at Mugnano) in direct response to a question I posed to the Saint!  These personal experiences of the Virgin-Martyr’s powerful intercession have prompted me to designate her as one of two special patrons for my Guadalupe House relic ministry.

Please visit www.philomena.us for additional information concerning St. Philomena or to support her Mugnano Shrine, via purchases of devotional articles of the Saint (blessed oil, medals, statues, and even clothing-relics from the gown worn by the miraculous statue that encloses her precious remains). 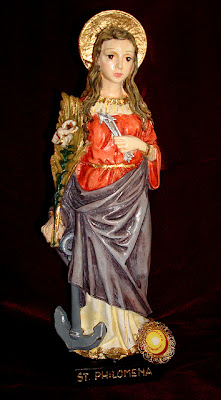 A lovely statue of St. Philomena and a little relic that
I obtained from the Saint’s shrine in Mugnano.

Novena Prayer to St. Philomena (to be prayed for 9 days)

We beseech Thee, O Lord, to grant us the pardon of our sins by the intercession of St. Philomena, Virgin & Martyr, who was pleasing in Thy sight by her eminent chastity and by the profession of every virtue. Amen.

Illustrious Virgin & Martyr, St. Philomena, behold me prostrate before the throne whereupon it has pleased the Most Holy Trinity to place thee. Full of confidence in thy protection, I entreat thee to intercede for me with God; from the heights of Heaven deign to cast a glance upon thy humble client! Spouse of Christ, sustain me in suffering, fortify me in temptation, protect me in the dangers surrounding me, obtain for me the graces necessary to me, and in particular [specify your petition here].

Above all, assist me at the hour of my death. St. Philomena, powerful with God, pray for me.  Amen.

(Conclude with an Our Father, a Hail Mary, and a Glory Be in honor of St. Philomena)