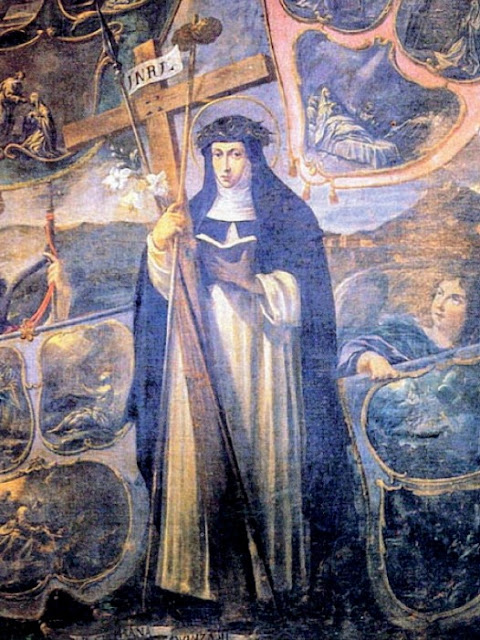 Bl. Stefana de Quinzanis
A Light of Dominican Spirituality ~ Memorial: January 3rd
Happy New Year!  This ministry opens its 2021 roster of monthly Saints/Blesseds with the story of another amazing, yet obscure, holy woman - Bl. Stefana de Quinzanis - an Italian mystic affiliated with the Dominican Order.  She was born on February 5, 1457 in the peasant village of Quinzano d'Oglio where she was curiously described by one biographer as being rather homely in appearance but admired for possessing beautiful, luxurious hair; locks she later shaved when she realized they attracted unwanted attention.
At just 7, our protagonist experienced her very first contact with Heaven after she was inspired to pronounce a private vow of poverty, obedience, and perpetual chastity in total dedication of herself to God.  Jesus came to Stefana accompanied by Our Lady and a trio of Dominican Saints: St. Dominic de Guzman (d. 1221), St. Thomas Aquinas (d. 1274), and St. Catherine of Siena (d. 1380) to place a wedding ring on the precocious youngster's finger - a Mystical Betrothal - signifying his pleasure and acceptance of her generous offering.
Also in her childhood, the Beata had the privilege of being spiritually guided by the saintly Dominican priest, Bl. Matteo Carreri (d. 1470), who bore the stigmatic wound of the chest/heart... and predicted to Stefana that she, too, would one day be like him; marked with wounds of Divine Love.  Not long after, the little mystic received another vision of St. Dominic, the illustrious founder of the Dominican Order, who along with a group of angels, vested her in a symbolic black and white Dominican habit.  Prior to then, Stephana had been employed as a domestic servant, but at 15-years-old her vision was realized when she was accepted into the Dominican Third Order in Crema then clothed in the same habit given her by St. Dominic. 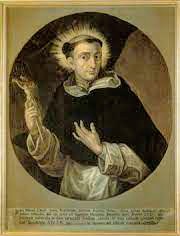 A stigmatic priest, Bl. Matteo Carreri, was a spiritual mentor
to Bl. Stefana de Quinzanis.
It should be noted that Stefana also maintained a lifelong devotion to St. Catherine of Siena, who she looked upon as a pinnacle of Dominican piety. She imitated the Saint's virtues and ascetic practices (e.g. extreme fasting), and began experiencing similar graces as her Sienese role model.  An example would be the "wounds" already mentioned - St. Catherine bore the Stigmata of Christ invisibly, but in Stefana's case, the wounds were quite visible and bled after she received them at aged 14 from a vision of Bl. Matteo Carreri, who had just died.  Hence, for the following forty years, she relived the painful drama of the Passion every Friday, while in ecstasy, which was attested to by many witnesses, including prominent nobles.  Another grace she had in common with St. Catherine was the "mystical exchange of hearts" during which Jesus took away her heart only to replace it with his very own, burning with love... and lastly, the abilities to heal and know hidden and future events were other favors bestowed on Stefana by our Lord.
Not surprisingly, because of the visible nature of her stigmata and other charismatic gifts, Stefana became a sought-after counselor in northern Italy. Among those who came to her for advice were peasants, prelates, nobility, and other holy people of her time such as her fellow Dominican, Bl. Osanna of Mantua (d. 1505), and St. Angela Merici, foundress of the Ursulines (d. 1540).  Her gift of infused knowledge served her well since she was able to dispense wise counsel, and expertly discuss lofty theological topics with the most learned Church officials. 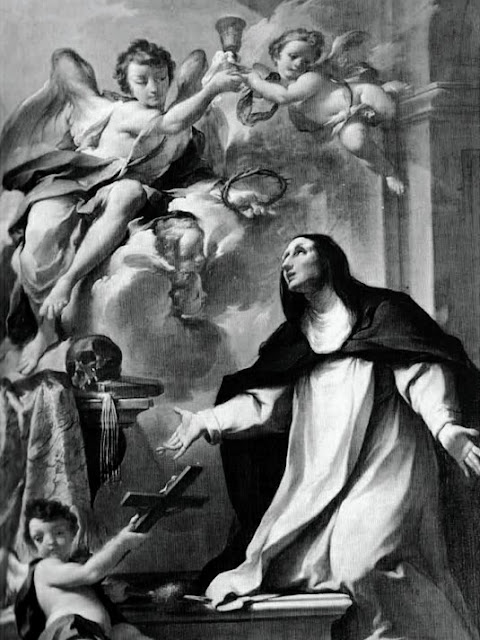 Bl. Stefana received visits from the inhabitants of
Heaven, including angels.
After ministering for a time in Crema, Stefana was divinely prompted to found a monastery of Third Order Dominicans in Soncino, dedicated to St. Paul, where she was nominated to the office of Prioress.  It was reported that Jesus, out of gratitude for all her labors and sacrifices, once asked her, "Daughter, you have given me the total gift of your will - what reward would you desire?" to which the Beata admirably replied, "I want no other reward than yourself."
Bl. Stefana de Quinzanis passed onto her Eternal Reward on January 2, 1530, at the age of 72; a long life lived in the service of others and expiatory suffering.  Ever in deep union with her Divine Spouse, her final recorded words were, "Into thy hands, Lord, I commend my spirit".  Immediately, her tomb became a place of pilgrimage where many cures were reported.  The locals held her memory in such deep, lasting reverence it led Pope Benedict XIV to confirm her cultus on December 14, 1740; thus, officially placing her among the ranks of the recognized Blesseds of the Church.  Just one more verified miracle is needed to advance her Cause to Sainthood. 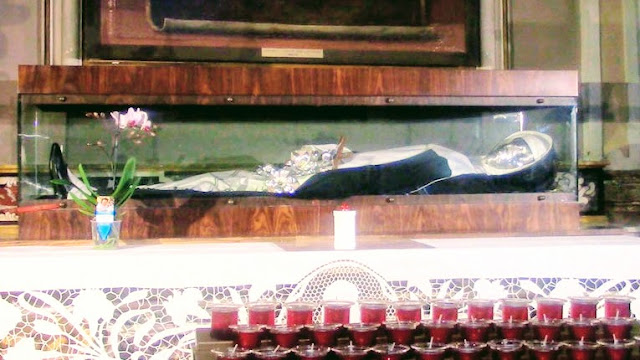 The bodily relics of the Beata, as venerated in Soncino, Italy.
If you, the reader, was positively impressed in any way after reading the life of Bl. Stefana, take a moment to join this ministry in praying for her speedy Canonization.  Ask her intercession, too, for a special favor or petition!  May she pray for our needs and the needs of the Universal Church.
Peter @ Guadalupe House Ministry, Honolulu