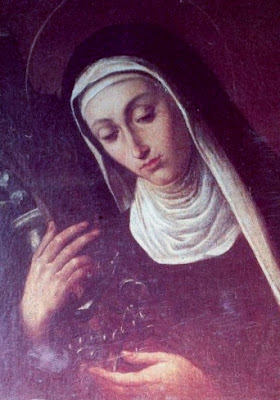 
Born in a humble stable in Messina, Italy - on a Good Friday in 1434 - this remarkable woman seems to have been one of those rare souls, who from their earliest years was predestined by Our Lord to live a life of intimate union with him. Baptized “Smerelda” by her noble parents, her devout mother raised her in a pious atmosphere that contributed to her rapid growth in virtue and grace. She was so good even as a child, the devil had a sense of her sanctity and tried to kill her by throwing her off a high balcony! Smerelda’s mother witnessed the horrific event and cried out to God for help, after which a mysterious woman suddenly appeared, caught the child in mid-air, then restored her to the balcony before vanishing.

Not surprisingly, Smerelda developed a strong desire to consecrate her life completely to God, but her father and brothers would not hear of it, as they had plans to marry her off to another wealthy family. The pious maiden fled to the local Poor Clare monastery, but her brothers pursued her when they learned what she had done. Breaking into the monastery, they tried to take her by force but relented when they saw that their efforts were futile against her firm resolve to become a bride of Christ.

Smerelda rejoined the Poor Clares and took the name, “Sr. Eustochia”, in honor of a local Saint. She quickly distinguished herself by her exceptional practice of virtue, self-imposed penances, and the mystical gifts that the Lord began to grant her. She also came to realize that the monastery wasn’t properly following the strict religious Rule, as written by St. Clare of Assisi - the founder of the Franciscan Poor Clares - and had become laxed, so she conceived a plan to start another monastery that would practice the Rule in its original form. Her plan was greatly opposed by many of the sisters, but with the help of her influential relatives, and in the company of a few sympathetic nuns, Sr. Eustochia left her community to establish a new one in Messina.

In the beginning, life was very difficult for Sr. Eustochia and her sisters, because they were treated with suspicion by both civil and religious authorities. But the Lord sustained them, sometimes through miracles worked by the young foundress… for example, during times when donated food was scarce, Sr. Eustochia’s prayer would mysteriously stretch the monastery’s meager supply of food, or bring about the timely arrival of a stranger (an angel?) bearing a much needed gift of bread and other food supplies. As news of her supernatural abilities spread outside the monastery, the people slowly came to support the virtuous occupants of the new monastery; vocations increased and the monastery had to be relocated to accommodate the growing number of nuns. As the elected Abbess, Sr. Eustochia proved herself to be an excellent administrator and a role-model for her spiritual daughters. 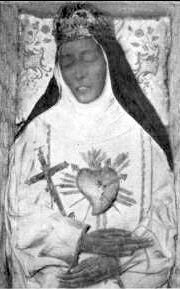 Towards the end, exhausted by extreme penances and totally consumed by her burning love for God, Sr. Eustochia died in 1491. Her body was radiant with heavenly beauty, and the Stigmata, which had wounded her hands and feet for many years, were fragrant with the Odor of Sanctity. The entire city of Messina mourned and celebrated the nun whom they had considered their special protector even while alive. Today, her incorrupt body (right) is magnificently enshrined in a sanctuary adjoining her monastery in Messina, where it is venerated with annual festivities. St. Eustochia Calafato was Canonized in 1988.

A Reflection
God lovingly protects and cares for his faithful servants.

A Short Prayer
Lord, protect us from the snares of the devil as we strive to do your will.  Amen.