Saint of the Month - December 2015: Saint Lucy of Syracuse 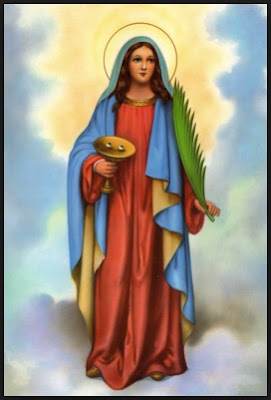 This female Martyr's name - Lucy (or Lucia) - has its origin in the Latin word, "Lux", which means something tremendously uplifting and hope-filled - LIGHT.  In this valiant woman's case, it was also highly prophetic that she carried the name, considering the times that she lived in - a world ruled by pagan Rome, which was at the height of its worldly glory... but sunken in the very depths of its moral darkness (seem familiar?).  The persecution of Christians was also at its fiercest during her lifetime and Lucy's faith-example was like a lamp that lead others to Jesus Christ.

Some readers may find it of interest that the body of St. Lucy, which remains intact up to this present day, is one of the earliest cases of incorruptibility in the Church; a phenomenon that continues to attract believers to the major relic-shrines of mysteriously preserved Saints and Blesseds, mainly concentrated in Europe.

According to scant historical facts, combined with pious tradition, this youthful Saint was born in Syracuse, Italy, around the year 283 and died there in witness of the Faith in 304. The account of her life runs similar to other famous Virgin-Martyrs such as St. Agatha of Catania (d. 251) and St. Agnes of Rome (d. 304), in that she was reportedly a young woman who was betrothed to a pagan against her will.  She rejected him for Christ and ultimately paid for it with her life. 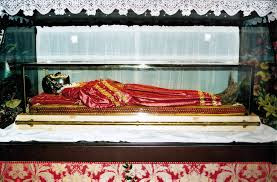 The preserved body of St. Lucy of Syracuse, with the skull masked in
silver, as enshrined and venerated in the city of Venice, Italy.

So as the story goes... Lucy was secretly a follower of Christianity and reportedly very, very pious; so much so that she consecrated her virginity to God, unbeknownst to her mother, a noble widow named Eutychia.  At an opportune time, Eutychia - following the social custom and practices of her time - arranged for Lucy's hand in marriage to a suitor from a wealthy pagan family.  But sometime before the wedding contract could be finalized, Eutychia was struck by a mysterious illness after which her daughter suggested they make a pilgrimage to the neighboring city of Catania, to pray at the tomb of St. Agatha, a Martyr venerated by Christians in Sicily. There, Eutychia was apparently healed through the Martyr's intercession and Lucy was also granted a vision of Agatha, who prophesied to her: "You will be the glory of Syracuse... as I am of Catania."

Taking advantage of the situation, Lucy confided to her mother the vow of virginity that she had made to our Lord and begged Eutychia's permission to remain unmarried. Her mother, deeply impressed by her own miracle, consented but it left Lucy's ex-fiance both embarrassed and furious at being set aside.  To add fuel to his fire, Lucy had also began openly distributing her family's large wealth among the poor of Syracuse, which brought her under heated suspicion as a Christian.  Her former suitor denounced her as such to the Roman Governor of Syracuse to whom she bravely confessed her faith in Jesus Christ.  She was ordered to make a sacrifice before an idol of their deified Emperor, Diocletian, but she steadfastly refused to do so.  Instead, she loudly reproached the pagans for their false beliefs and extolled her faith in the one true God. 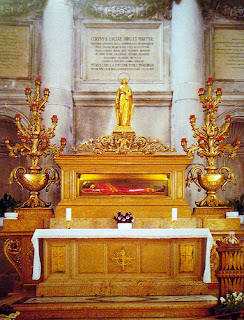 Wanting to make an example of her to the gathered spectators, what followed next was a series of brutal tortures to make Lucy recant her profession of faith, e.g. beatings and a failed attempt at burning her alive; she never waivered... and this post wouldn't be complete without the mention of her reportedly beautiful eyes being blinded by her captors... then being miraculously restored by a vision of the Lord, himself.  Hence, the reason why St. Lucy is popularly invoked as the Patron Saint of Eye Issues.

Lucy eventually gained the Crown of Martyrdom by being beheaded. Her torture and death had the opposite effect the governor wanted.  Rather than discouraging Christians in Syracuse, it rallied them, and inspired the conversion of many pagans; Lucy became another hero for the young Church.  Hence, she earned the glory foretold her by St. Agatha in Catania. The Saint's bodily relic remained incorrupt throughout the centuries and eventually found its way to the Church of St. Geremia in Venice, where it lies enshrined in a glass urn for the veneration of the Faithful (left photo).

A Reflection
"You are the light of the world. A town built on a hill cannot be hidden. Neither do people light a lamp and put it under a bowl. Instead they put it on its stand, and it gives light to everyone in the house. In the same way, let your light shine before others, that they may see your good deeds and glorify your Father in Heaven."


A Short Prayer
Lord, as you did with St. Lucy, enkindle within us the flame of Faith and Truth.  May its light shine brightly and lead others to also glorify our Heavenly Father.  Amen.