Monthly Message from the Queen of Peace of Medjugorje: June 25th, 2022

“Dear Children, I rejoice with you and thank you for every sacrifice and prayer which you have offered for my intentions.  Little children, do not forget that you are important in my plan of salvation of mankind.  Return to God and prayer that the Holy Spirit may work in you and through you.  Little children, I am with you also in these days when satan is fighting for war and hatred.  Division is strong and evil is at work in man as never before.  Thank you for having responded to my call.”
Peter @ Guadalupe House Ministry, Honolulu No comments:

"Every celebration of the Eucharist
is a ray of light of the unsetting sun
that is the Risen Jesus Christ."
- Pope Francis 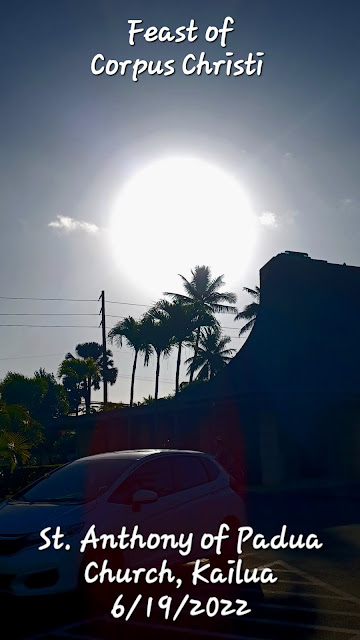 In the pic above, the sun was photographed this morning and appeared looking like a brilliant, phenomenally massive Host above this writer's parish church.  How appropriate for today's feast, which honors the Precious Body and Blood of our Lord Jesus Christ!
O Sacrament most Holy,
O Sacrament Divine,
All praise and all thanksgiving
be every moment Thine!
To read inspiring stories about Eucharistic Miracles from around the world and in the lives of our Saints, click here.
* * * UPDATE * * *
I attempted to debunk the above solar photo with a second pic (right) taken a couple mornings later on 6/21/2022 at about the same time of day as the first; using the same cellphone; standing at the same spot in the church parking lot.  The difference between the two photos is obvious and compelling. 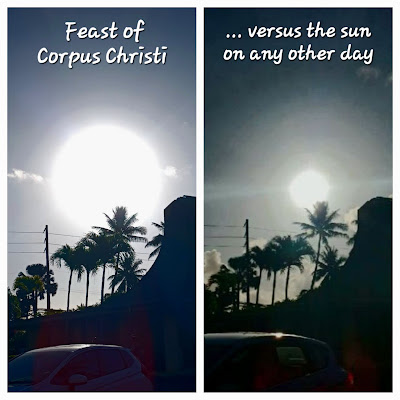 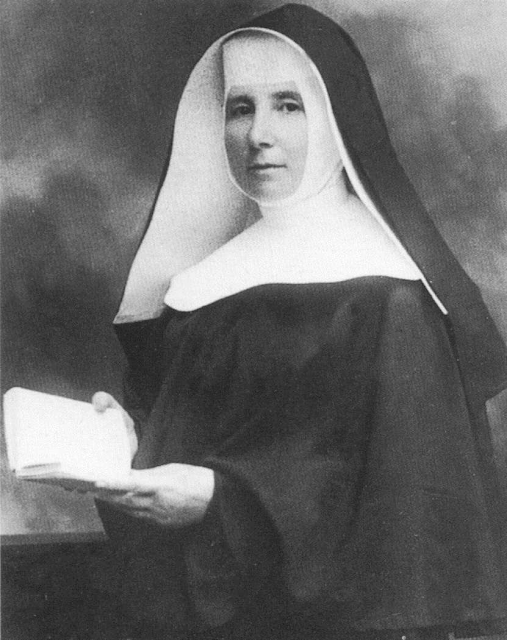 The Servant of God
Sr. Teresa Veronesi
Mystic, Religious, & Teacher
Born on September 28, 1870 in San Ruffillo (Bologna), Italy, this Servant of God was baptized Teresa Veronesi.  A biography described her as an intelligent child with a lively and pleasant disposition.  Athletic and competitive in her early youth, she was skilled at horseback riding and swimming (she once rescued a drowning boy!).  What wasn't obvious to others was that she had a hidden mystical side, which began from age 8 when she witnessed a statue of Christ mysteriously illuminate after her first Holy Communion, and heard the Lord inviting her to totally consecrate herself to him; she generously said "yes" to Jesus and, from henceforth, she spent a great deal of her free time heavily involved with various Catholic social service groups and in deep contemplative prayer in the evenings.
At 17, a close acquaintance happened to speak to Teresa of the rumored sanctity of a certain deceased local woman - Clelia Barbieri (now a Saint) - who had recently founded a new congregation in nearby Le Budrie called the Suore Minime dell' Addolorata.  Intrigued, the pious teenager visited the sisters to experience their charism firsthand - it goes without saying that she was immediately impressed by their mode of life and resolved to join them, as soon as possible.
Teresa's parents were at first opposed to her vocation, but after realizing they could not break her determination, they reluctantly acceded to her desire to join the Suore Minime.  She was welcomed with open arms at Le Budrie in July 1887 and professed vows in April 1888.  Teresa became a teacher and catechist for the convent's elementary school and, remarkably, elected the group's superior in 1889.
In her personal spiritual journey, Teresa was expertly guided by Don Gaetano Guidi, who was also the confessor/advisor of St. Clelia Barbieri.  He was of great help to the nun being that her mystical experiences were now escalating.  Unknown to most people, she was having frequent ecstasies sometimes accompanied by visits from our Lord, often as the suffering and crucified Savior.  He spoke to Teresa about the dire state of the world due to its sins and, it was during one of these private apparitions, that he bestowed on her the Crown of Thorns visibly manifested as bleeding stigmatic wounds around her head.  In her humility, she kept the stigmata a secret by wrapping her head with bandages, which she then successfully hid under the veil she wore... and if these mystical sufferings weren't enough, she was at times subjected to physical attacks by demons, in retaliation for her fidelity to her Divine Spouse, which she bravely battled with prayer and voluntary penances.

Sr. Teresa was visited many times by Christ
Crucified and shared in his Passion.
Despite the intensity of her mystical life, Teresa was a practical and productive religious.  Seeing a need in her hometown, she opened a convent-school of the Suore Minime in San Ruffillo in 1907.  The following year, she established another foundation in Sant' Agata Bolognese where she spent the rest of her life as both a respected superior and much-loved elementary school teacher.  Furthermore, gossip of Teresa's holiness and mystical gifts led to many visitors coming to the convent to seek her prayers and counsel since she was reputed to be a healer; a prophetess who foresaw future events; and a miracle worker.
After 60+ years of service to the Church in Bologna, Sr. Teresa Veronesi died peacefully on May 16, 1950.  Her enduring legacy of faith, education, charitable service, and heroic virtue prompted the opening of her Cause for Canonization in Bologna on February 19, 2000.  The diocesan process successfully closed in April 2003 and her Cause is now being reviewed by the Congregation for the Causes of Saints in Rome.  Two verified miracles are required for her to be declared an official Saint.
Please join this ministry in praying for the speedy Canonization of this hidden gem of a Servant of God - Sr. Teresa Veronesi, pray for us!
Peter @ Guadalupe House Ministry, Honolulu No comments: