Yesterday, after attending the noon Mass in the Cathedral of Our Lady of Peace in Honolulu, I wandered into the nearby Pauline Bookstore to do some browsing.  I always end up in the statues section of the little shop, admiring the many inspiring images of Jesus, Mary, and the Saints.  I noticed the good Sisters had displayed a new line of 4" religious figurines on the shelves and my attention fell upon one in particular - it was a beautiful statuette of Jesus, as Divine Mercy.
I knew I didn't need another statue, no matter how attractive or reasonably priced it was, and I debated with myself about buying it... but when I picked up the figurine to take a closer look at it, a small green sparkle beneath its heart suddenly caught my eye; I  immediately knew it was an Escarcha. 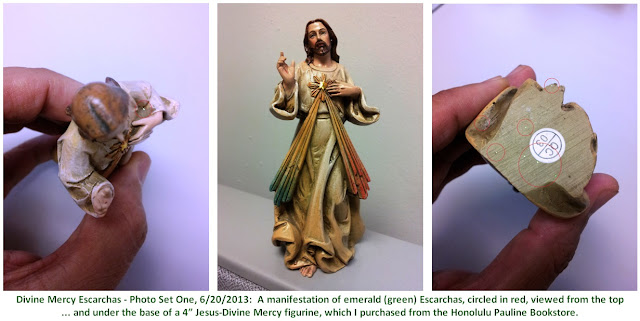 (click on the above photo to view larger images)
It had been a few weeks since I last witnessed the mystical appearance of Escarchas and I was taken aback when more of the green flakes (like tiny, bright emeralds!) began randomly materializing on the image while I held it.  That was all the prompting I needed to bring the statuette up to the cash register so I could pay for it.  I remember being so excited, I declined the gift box the figurine came in and the paper package, too... just so I could hurry back to my workplace with my newly acquired treasure.

Back at my desk, I watched with awe as more emerald Escarches began dotting the statue and I said a quick prayer to Jesus asking him to shield me with his Precious Blood, just in case there was diabolic deception involved with what was happening.  But rather than stopping, more Escarchas continued to appear, including a few fine flakes of gold on both my palms and on the figurine's head... and a single red one near the foot!  Trust me - it was a beautiful and awesome sight to witness, although it's unfortunate that the photos in this blog do not adequately capture the numbers and the brilliance of the Escarchas. 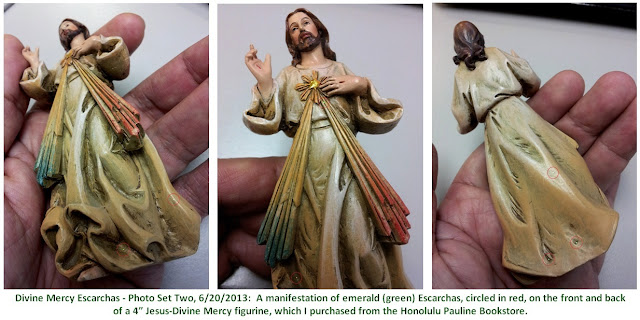 (click on the above photo to view larger images)

Later that night, after I got home, I reflected on the day's events and wondered about the meaning of the Escarchas.  The first thoughts that came to mind was about an alleged private revelation made by the Blessed Virgin to a priest concerning the meanings of the various colors of Escarchas; the green flakes are supposed to signify a call for us to have HOPE, so when I put two and two together, I surmised the Lord was drawing my attention to the essence of the revelations he gave to St. Faustina Kowalska (d. 1938):


In Divine Mercy, there is Hope.

Being fully aware of my faults and weaknesses, it was a reminder that both comforted me and indeed filled my being with joyful hope - a "message" that others can take to heart and benefit from, as well.

And lastly... I also had a nagging feeling that there was something else significant about yesterday's Escarchas that I was overlooking.  After researching prior postings from my blog, I realized what it was I had forgotten.  Yesterday - June 20th - marked exactly a year to the day that I had my very first sighting of Escarchas!  So the experience yesterday did not just signify a message of some sort... but as it turned out, the Escarchas were also meant to be commemorative.  A gift I needed to acknowledge and be grateful for to our Lord.  Thank you, Jesus.
"My secretary, write that I am more generous toward sinners than toward the just.
It was for their sake that I came down from Heaven; it was for their sake that my Blood was spilled.
Let them not fear to approach me; they are most in need of my mercy."
Words of our Lord to St. Faustina Kowalska,
the "Apostle of Divine Mercy"
Peter @ Guadalupe House Ministry, Honolulu